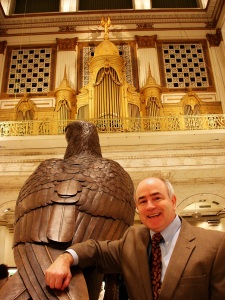 Heritage Center at the Union League (entrance at sidewalk level)
140 South Broad Street Philadelphia, PA 19102
Free
RSVP by e-mail to foundations@unionleague.org or by phone to 215-587-5596
There is not a dress code for this event.

Called a “riveting presentation on the Wanamaker Organ” by Friends of The Wanamaker Organ Executive Director, Mr. Ray Biswanger, it also received a favorable nod from Macy’s Grand Court Organist, Mr. Peter Richard Conte, and enthusiastic support from Dr. William Allan Zulker, author of “John Wanamaker King of Merchants.” It is a visual window into the former glory of the Wanamaker department store, with a unique perspective on Philadelphia’s famous retail pioneer John Wanamaker.

Mr. Seifert is a native of Merion, PA. He studied music in Philadelphia at the former New School of Music and Philadelphia College of Bible. He is a graduate of The Boston Conservatory of Music, Boston, MA, with a degree in Applied Piano, and earned his Teaching Certification in Music Education from Western Washington University, Bellingham, WA. He taught Piano, Choral and Elementary Music in the Seattle area schools for many years, and was President of The Snohomish County Music Teachers Association, where he developed a variety of music festivals and programs for local youth. In 2012 Mr. Seifert relocated back to Philadelphia and currently teaches privately at Lower Merion Piano. Passionate about Philadelphia history, Mr. Seifert volunteers as a historian/archivist for the Friends of The Wanamaker Organ.

The Heritage Center at the Union League

Hours open to the public: Tuesday and Thursday, 3:00pm until 6:00pm

This site uses Akismet to reduce spam. Learn how your comment data is processed.