Once upon a time before computers, nifty little machines were used in classrooms and museums to make lectures visual; come engage with our film strip viewers! END_OF_DOCUMENT_TOKEN_TO_BE_REPLACED

Come learn about Parmesan making in Italy according to Thomas Jefferson, the history of food conservation in WWI, how tofu was made in the 18th century, William Glackens’ recipe for beer, and more!

END_OF_DOCUMENT_TOKEN_TO_BE_REPLACED

This symposium brings together scholars and archivists to theorize animal traces in historical archives, where they come to be represented textually, visually, and even materially—both dead (as in leather bindings, parchment, glues, and taxidermy specimens) and very much alive (as in bookworms, silverfish, mice, and other archival “pests”). END_OF_DOCUMENT_TOKEN_TO_BE_REPLACED

The 2015 Philadelphia Lantern Slide Salon will showcase glass lantern slides from the special collections of 7 Philadelphia institutions projected from an historic lantern projector in the Wagner’s Victorian-era lecture hall. 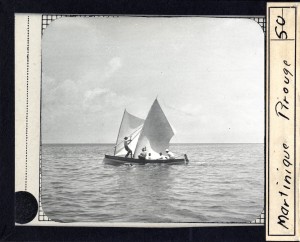 Glass lantern slides are wonderful artifacts in and of themselves, but they are most interesting when we discuss the context for which they were originally created. In the spirit of lantern exhibition culture, this year’s salon participants will present a narrative story with their slides. The American Philosophical Society, the Athenaeum of Philadelphia, the Franklin Institute, the Friends Historical Library of Swarthmore College, the Scott Memorial Library of Thomas Jefferson University, the University of Pennsylvania Museum of Archaeology and Anthropology, and the Wagner Free Institute of Science will present an exciting evening of education and entertainment. Sit back and relax as we travel to the American West and the Lesser Antilles, delve into the destruction and relief efforts of WWI, get early 20th century lessons in social studies and science, and learn the benefits of abstinence from alcohol.

Predating the motion picture, lantern slides were used for entertainment and to illustrate educational programs. The Philadelphia Lantern Slide Salon will be held in the Wagner’s Victorian-era lecture hall using an historic lantern projector. Please join us for a rare treat as we revive an old technology in order to see culturally significant lantern slide collections from the libraries and archives of Philadelphia’s most distinguished institutions.

A screening of 8 or 9 works, originally on film, that are housed in local Philadelphia repositories. Thanks to the generosity of NFL Films, five of these works were transferred to digital files and are now accessible to the public. They include home movie footage, documentaries and even Muppets! Representatives from all the organizations involved will be on hand to discuss the films and answer questions. 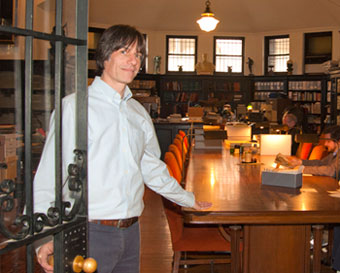 Take a trip through Penn Museum history with “Unearthed in the Archives,” every Friday at 1:30 pm in the Penn Museum Archives. These short, weekly chats investigate the many interesting and unusual documents being safeguarded in this vast collection. Guests can look for a new experience each week, based on expedition records, vintage photographs, manuscripts, personal letters, and much more. Half-hour sessions begin at 1:30 and 2:00 pm; each program is FREE with regular admission.

Hollywood in the Amazon

The world’s first sound-synced expeditionary film, shot during a 1931 Penn Museum expedition to a remote Amazonian jungle, forms the centerpiece of Hollywood in the Amazon, a special exhibition developed as part of the University of Pennsylvania’s 2013-14 Year of Sound. The exhibition runs August 18, 2013 through July 27, 2014 in the Penn Museum’s third floor Special Exhibitions gallery.In 1931, an expedition from the Penn Museum introduced a revolutionary new research method in the remote Amazonian jungles of Brazil. Transporting state-of-the-art equipment by sea, air, and river, the team arrived in territory occupied by the Bororo people and recorded an expeditionary film, Matto Grosso, the Great Brazilian Wilderness, incorporating live sound. It was the first time non-Western people were seen and heard on sound-synced film.A collaboration between Academy award-winning cinematographer Floyd Crosby (father of musician David Crosby), wealthy industrialist E. R. Fenimore Johnson (whose father founded Victor Talking Machine Company), big game hunter Sasha Siemel, and Penn Museum anthropologist Vincenzo Petrullo, the groundbreaking film is presented in its 49-minute entirety.The small gallery exhibition tells the colorful story of the remote expedition, fraught with physical trials for anthropologists and filmmakers alike. Several artifacts from the Bororo people, collected during the expedition, enrich the story. Translations of the Bororo speakers, obtained from Bororo people in 2011, provide another aspect to the tale.

About the Film and the Museum’s Archival Film Collection:

The 1931 film Matto Grosso, the Great Brazilian Wilderness was originally intended to provide a new kind of record of people, flora, and fauna. “As with many early attempts at documentary films, the end result is more of a mirror reflection of the people making the film,” noted Penn Museum film archivist Kate Pourshariati, adding “some of the quaint narrative devices employed are rightly viewed with skepticism.”

After some early theatrical screenings, the film was relegated to relative obscurity in the Archives until 2008 when, under a grant from the National Film Preservation Foundation, the film and its sound were restored. The Museum plans a DVD release of the film for wider distribution.

Matto Grosso, the Great Brazilian Wilderness is one of many archival films in the Museum’s collection, which includes hundreds of ethnographic, travel and other films and clips. Thanks to a collaboration with the Internet Archive, the majority of the Museum’s rare and often fragile early archival footage, once largely inaccessible, was digitized in 2008, and makes up much of the Penn Museum’s popular YouTube channel, which surpassed a million viewers in May 2013.

Ms. Pourshariati also curates an occasional Penn Museum film series, Live from the Archives!, as well as an annual Second Sunday Culture Film Series—bringing audiences and experts together to watch and share conversations about old and contemporary ethnographic films.

While working on the film restoration project, Ms. Pourshariati, with help from Penn Museum Consulting Scholar Greg Urban, was able to connect with Brazilian anthropologist Dr. Sylvia Caiuby Novaes, and through her, to Bororo people today. They watched (and apparently enjoyed) the film, in one case providing an actual name of one now-deceased Bororo shaman, and providing translations of the Bororo dialogue. These translations can be used as optional English subtitles in the Museum’s planned new DVD release of the film.

Speaking to the value of this archival film and others, Ms. Pourshariati said, “The age of large individually sponsored expeditions has come to an end, and even very remote parts of the world have been traveled. Filmmakers from international source communities now produce their own documentaries, giving essential indigenous perspectives to the expanding universe of knowledge.

“Still, these early films have great value. In museums and archives, we are now arriving at a quite thrilling time in which the generations of collected materials can be shared back with these source communities, offering inside perspectives on materials long hidden from view.” 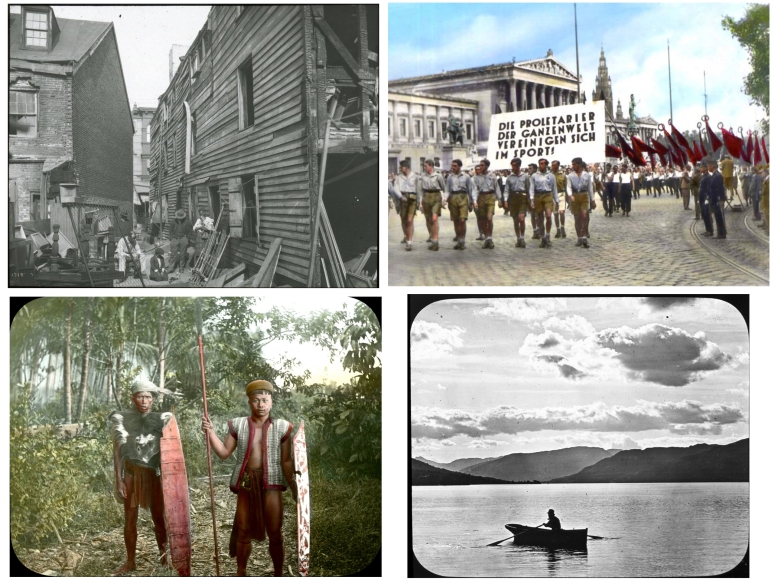 The Wagner Free Institute of Science will host its first-ever lantern slide salon highlighting the historic lantern slide collections of some of the region’s most significant cultural and educational institutions: The Athenaeum of Philadelphia, Independence Seaport Museum, Morris Arboretum, Swarthmore College Peace Collection, Temple University Special Collections and Research Center, the University of Pennsylvania Museum of Archaeology and Anthropology, and the Wagner Free Institute of Science.Predating the motion picture, lantern slides were used for entertainment and to illustrate educational programs and courses. This salon will bring together some unique and rarely-seen images that depict a vast range of subjects: from the local—early engineering feats and turn-of-the century views of Philadelphia’s neighborhoods—to the international—the Spanish American War, Early 20th Century Japanese life, 1930s peace demonstrations in Berlin, the Jewish immigrant experience and more. The salon will be held in the Wagner’s unchanged Victorian lecture hall using an original lantern slide projector. Join us for a rare treat as we revive an old technology in order to see globally significant lantern slide collections drawn from the libraries and archives of Philadelphia’s most distinguished institutions.This program is part of the Global Philadelphia™ Exposition.RSVP: https://lanternslidesalon.eventbrite.com/
Wagner Free Institute of Science, 1700 W Montgomery Ave Philadelphia, PA 19121

Find out more about what happens in the galleries – and behind the scenes – at this 125-year-old museum of archaeology and anthropology, where new research and discoveries continue to happen. Curators, keepers, and researchers share some of their projects. Docents offer gallery tours, and graduate students teach Egyptian hieroglyphics and Sumerian cuneiform mini-classes. Guests can also enjoy live performances of music and dance in the galleries. Additionally, in honor of Archives Month, the Museum Archives will be hosting tours of its new exhibit, “Hollywood in the Amazon,” as well as an open house and tours of the Archives, with select items on display. Staff will be on hand to talk about table-top displays featuring archival materials connected with the film, Matto Grosso, the Great Brazilian Wilderness (1931).