This symposium brings together scholars and archivists to theorize animal traces in historical archives, where they come to be represented textually, visually, and even materially—both dead (as in leather bindings, parchment, glues, and taxidermy specimens) and very much alive (as in bookworms, silverfish, mice, and other archival “pests”).

University of Pennsylvania
RAINEY AUDITORIUM, PENN MUSEUM 3620 SOUTH STREET, PHILADELPHIA, PA 19104 / LGBT CENTER AT THE UNIVERSITY OF PENNSYLVANIA 3907 SPRUCE STREET, PHILADELPHIA, PA 19104
Free
“Animals in the Archives” is a two-day symposium at the University of Pennsylvania that brings leading figures in animal history together with Philadelphia-based archivists to theorize the historical traces that animals leave behind. The symposium focuses on how animals come to be represented textually, visually, and materially in historical archives—both dead (as in leather bindings, parchment made from animal skins, iron-gall inks, hide and bone glues, and taxidermy specimens) and very much alive (as in bookworms, silverfish, mice, and other archival “pests” that eat the bindings, adhesives, and other substances in library and archival collections). By thinking through the stakes of nonhuman animal representation in archives, the symposium addresses both the history of human-animal relationships across time and the theory and practice of history and archival classification. It aims to provide a broader view of the human past and to reconsider the anthropocentric biases of conventional historical practice, while also exploring methodological questions about the possibility of history beyond the human. 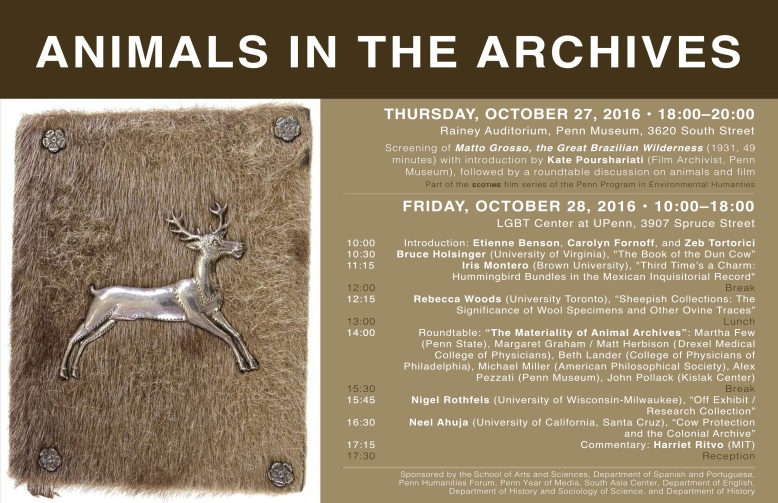 The symposium begins on Thursday, October 27, with a screening of the documentary film “Matto Grosso, the Great Brazilian Wilderness” (1931) at the Penn Museum’s Rainey Auditorium from 6:00 to 7:00 PM. In the late 1920s Eldridge Reeves Johnson, inventor and former corporate magnate, developed a relationship with the University of Pennsylvania Museum of Archaeology and Anthropology that would indirectly result in pioneering work in film technology history. In 1930 Captain Vladimir Perfilieff, a Russian-born artist and adventurer, and John S. Clarke, friend and former classmate of Johnson, asked him to fund a zoological and ethnographic expedition to be undertaken and filmed in the Mato Grosso plateau of Brazil. “Matto Grosso” is the result of this joint expedition, which documents the people, animals, and environment of the region. For more information, see: http://www.penn.museum/sites/mattogrosso/. Penn Museum archivists will introduce and contextualize the film. The 49-minute screening will be followed by a roundtable from 7:00 to 8:00 PM on the topic of animals and film.

A series of talks on Friday, October 28, from 10:00 to 5:00 PM will further explore the theme of “Animals in the Archives.” In the morning and the afternoon there will be presentations by five speakers: Bruce Holsinger (University of Virginia), Iris Montero (Brown University), Rebecca Woods (University of Toronto), Nigel Rothfels (University of Wisconsin, Milwaukee) and Neel Ahuja (University of California, Santa Cruz). At 1:00 PM we will hold a roundtable on “The Materiality of Animal Archives” featuring scholars and Philadelphia-based archivists. The symposium will be followed by a public reception at 5:00 PM.

These events are made possible by the generous support of the University of Pennsylvania School of Arts and Sciences, the Penn Humanities Forum, and the Penn Museum, with co-sponsorship from the Department of Spanish & Portuguese, South Asia Studies, the Department of History, and the Department of the History and Sociology of Science. We are also grateful to the Penn Program in the Environmental Humanities, the Mütter Museum, and the Kislak Center for their participation and support.