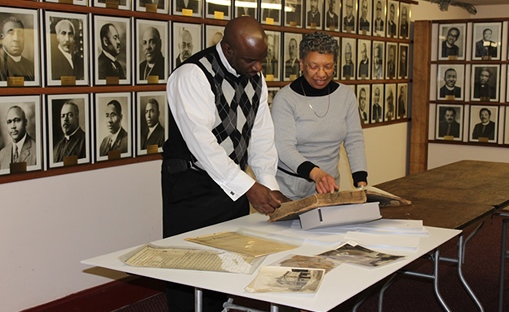 Mother Bethel African Methodist Episcopal Church has a long history of serving the needs of the community, from helping runaway slaves escape the South via the Underground Railroad to advancing the spiritual, social, and civic causes of African Americans and others in Philadelphia and beyond. Founded in 1791 by Richard Allen, one of the most active and influential African-American leaders in the early days of the United States, Mother Bethel has over the years hosted such legendary figures as Frederick Douglass, Lucretia Mott, William Still, and Octavius Catto. The present Romanesque-style building, completed in 1890, is the fourth Mother Bethel structure to stand on the property.

Prior to her work at Mother Bethel, Ms. Jerrido served for seventeen years as Director of Temple University Libraries Urban Archives and contributed to such research guides as the “Directory of African American collections in Greater Philadelphia and selected suburban areas.” Ms. Jerrido is a driving force behind Last Seen: Finding Family After Slavery, an online database of historic “information wanted” advertisements written by freed slaves seeking relatives after the Emancipation Proclamation. These advertisements contain the names of former slaves, owners, plantation locations, and missing relatives—a treasure trove for historians and those researching family histories. Ms. Jerrido’s efforts were recognized this year by the Preservation Alliance with a Preservation Education Award for public advancement of preservation knowledge.

*Pre-registration required for tour, which begins at 12:00 PM. Participants are warmly invited to attend Sunday services, which begin at 9:30 AM.